Another month has gone by, and another film festival that we couldn’t attend in person has been and gone. Hopefully, we’ll be able to attend a few in person next year, but in the meantime, we’re taking what we can get from virtual festivals. We’re glad that the organizers of the virtual events have found a way to go ahead with them at all, and in doing so, they’ve treated us to some truly spectacular premieres. They’ve also handed out a few controversial awards, as we’ve just seen at the 2020 Raindance Film Festival.

One of the big winners at the festival was a biopic of much-missed British music legend David Bowie, entitled “Stardust.” The relatively-unknown actor Johnny Flynn took the starring role in the movie as a young Bowie and impressed the Raindance panel so much with his performance that he took home the “best performance” award (or at least he would have taken it home if he’d been able to go and collect it in person). There’s no doubt that it’s a capable, studied performance, and Flynn’s devotion to capturing Bowie’s state of mind as he made the decision to transition from his own persona into “Ziggy Stardust” during an American tour is absolute. Flynn captures Bowie’s style and ethos perfectly, and is a worthy winner of the award. What makes it controversial is that few people concur that the film itself is award-worthy. 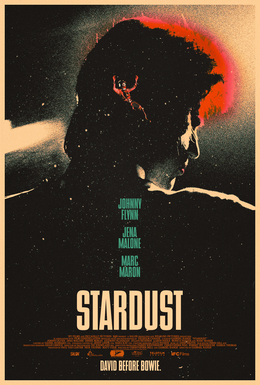 ‘Stardust’ is a biopic is one of the most famous and influential musicians who ever lived. A biopic covering one of the most fascinating periods of his life should be a guaranteed box office attraction of the kind that we saw with the recent Freddie Mercury and Queen film “Bohemian Rhapsody.” There’s a big difference between that film and “Stardust,” though, and it’s a musical one. “Bohemian Rhapsody” is packed full of Queen’s biggest and best-known hits. “Stardust” doesn’t feature one single original David Bowie song. This is David Bowie’s story told without David Bowie’s music, which rather begs the question of what the point is. Even Johnny Flynn himself has acknowledged that it’s likely to be criticized by fans, and ‘criticized’ might be an understatement. The Bowie family has publicly said that it wants nothing to do with the film, and it was the decision of Duncan Jones – Bowie’s son – to refuse the producers permission to use any of his father’s music.

While the lack of Bowie songs might be an issue for the film, it would likely have delighted Bowie if he were here to see it. He reveled in controversy, and ironically the producers of ‘Stardust’ pushing ahead with their vision without permission might have been something he approved of. Bowie is a man who never ‘sold out’ in life and still hasn’t in death. His contemporaries – men like Elvis Presley and Jimi Hendrix – have become posthumous brands. There are games featuring their music and likenesses available at online slots websites like Kong Casino. You won’t see anything like that featuring Bowie’s face. The star was notorious for ‘going quiet’ between recordings, and the thought of a David Bowie online slots game is as laughable as the thought of a David Bowie theme park. That might be a little disappointing any gamblers within his fanbase – many of whom would surely love a thematically-suitable online slots game – but the estate’s decision not to engage itself with commercial affairs has helped to protect his integrity as an artist.

Whether or not anyone is interested in watching a David Bowie biopic that the musician’s family has rejected, and doesn’t feature any of the music that made the man famous, is up to them, and it wasn’t the only story worth noting at Raindance. Unsurprisingly, “Stardust” didn’t receive the “Film of the Festival” award. That honor went to the latest dark comedy from Giorgos Georgopoulos, which has the somewhat long-winded title “Not To Be Unpleasant But We Need To Have A Serious Talk.” The international equivalent of that award, “Best International Feature,” went to the collaborative project “Force of Habit.” It’s a Finnish movie made up of seven connected stories filmed and told by seven different directors, and also picked up the “Best Screenplay” honor, too.

One of the quirkiest projects to pick up an honor at the festival was “He Dreams of Giants,” by Keith Fulton and Louis Pepe. The narrative of that movie deals with the thirty-year-long struggle of former Monty Python member Terry Gilliam to complete his movie “The Man Who Killed Don Quixote.” When the film was finally released in 2018, it was a box office bomb. Fulton and Pepe will be hoping for better things from their attempt to tell the story behind the film, and their “Best UK Feature” might help them in that regard. It didn’t win them “Best Director,” though. That went to Milcho Manchevski for “Willow.”

Those who tuned into the festival might also have seen a glimpse of a potential future Oscar winner. Whoever picks up the festival’s “Best Short” award receives an automatic nomination for the same accolade at the Academy Awards, and this year that was Cambodia’s Amit Dubey for “A Fallen Fruit.” Meanwhile, the “Best Music Documentary” award – a new addition to the festival for 2020 – went to Philip Sansom and Inigo Gilmore for “TOPOWA: Never Give Up.” Those of you who haven’t had the opportunity to see that film yet should consider doing so – it’s a true story, and it’s likely to be one of the most inspiring pieces of film-making you’ll see all year.

That completes our somewhat David Bowie-focused roundup of what happened at this year’s Raindance Festival, and we hope that you found it informative. Hopefully, by the time the 2021 date falls due, we won’t be subject to any travel restrictions, and we might be able to get there in person to do more detailed reporting. If we do, we hope to see a few of you there – and also at many of the other great film festivals that are tentatively penciled into our 2021 diary. Now that it’s almost over, we think we can all agree that 2020 has been a washout for films no matter how hard everybody’s tried to avoid it. It can’t get any worse – so let’s cross our fingers that 2021 makes up for it!

In Total Boss Move, Glenn Close Recalls How She Got To...

The "Zoey's Extraordinary Playlist" Cast Found Out Which Characters They Really...

Jennifer Lopez Says ‘Don’t Call Me A Liar’ As She Shuts...